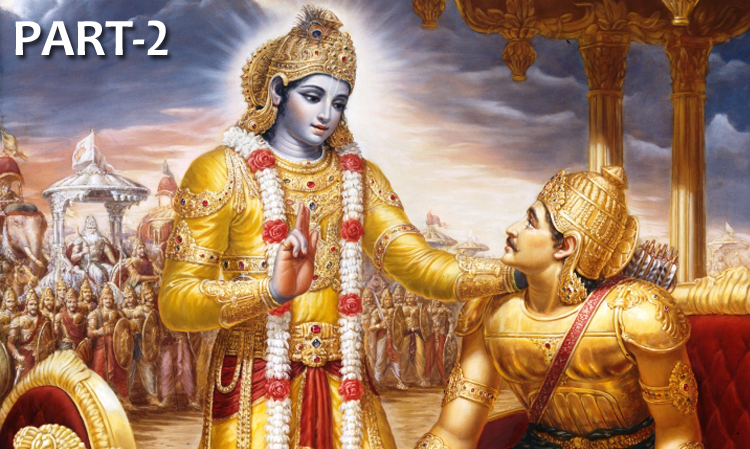 Lord states that whatever action is performed by a great man, common men follow in his footsteps.  And whatever standards he sets by exemplary acts, all the world pursues.  Further Lord states that though there is no work prescribed for Him, within all the three worlds, though He is not in want of anything nor does He need to obtain anything, yet He is engaged in work.  If He ceases to work, then all men would follow His path and all the three worlds would be put to ruination.  Thus He would also be the cause of creating unwanted population (varna-sankarah).  Arjuna being an intimate associate of the Lord, if he ceases to work, everyone within the three worlds may follow him and it may again lead to unwanted population.

Arjuna’s Argument No.4:  In verse no. 1.44 of Bhagavad-gita, Arjuna exclaims that driven by the desire to enjoy royal happiness, it is very strange that they are preparing to commit greatly sinful acts.  He considers killing his kith and kin assembled against him in the battlefield to be sinful.  Thus, he displays his fear for sinful reactions.

Krishna’s Refutation:   Lord warns Arjuna that by not fighting the religious war, he would be neglecting his specific duty as a ksatriya and thus incur sins.  Not only will he incur sins, but also he would lose his reputation as a fighter.  People would always speak of his infamy.

Once Arjuna fought with Lord Shiva, who was disguised as a hunter and defeated him.  Being pleased with Arjuna’s chivalry, Lord Shiva rewarded him a weapon called pasupata-astra.  Even Dronacharya awarded him a special weapon by which he could kill even his teacher.  He was credited with so many military certificates from many authorities, including his adopted father Indra.

Lord states for one who has been honoured this way by many great personalities, dishonour is worse than death.  When his enemies would describe him in unkind words, and even scorn his abilities, it could be more painful for him.

Lord also advises Arjuna to fight for the sake of fighting, without considering happiness or distress, loss or gain, victory or defeat – and by doing so, he will never incur sin.