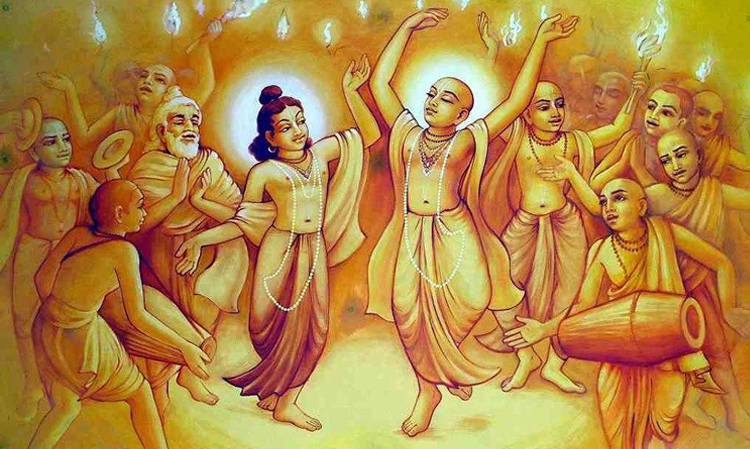 Srimad Bhagavatam predicts that in the age of Kali, people who are endowed with sufficient intelligence will worship the Lord, who is accompanied by His associates, by performance of sankirtana-yajna.

Lord Sri Chaitanya Mahaprabhu, the great apostle of love of God and the father of the congregational chanting of the holy name of the Lord, advented Himself at Sridhama Mayapura, a quarter in the city of Navadvipa in Bengal, on the Phalguni Purnima evening in the year 1407 Shakabda (corresponding to February 1486 by the Christian calendar).

In the Bhagavad-gita Lord Sri Krishna is depicted as the Absolute Personality of Godhead, and His last teachings in that great book of transcendental knowledge instruct that one should give up all the modes of religious activities and accept Him (Lord Sri Krishna) as the only worshipable Lord. The Lord then assured that all His devotees would be protected from all sorts of sinful acts and that for them there would be no cause for anxiety. Unfortunately, despite Lord Sri Krishna’s direct order and the teachings of the Bhagavad-gita, less intelligent people misunderstand Him to be nothing but a great historical personality, and thus they cannot accept Him as the original Personality of Godhead. Such men with a poor fund of knowledge are misled by many nondevotees. Thus the teachings of the Bhagavad-gita were misinterpreted even by great scholars.

After the disappearance of Lord Sri Krishna there were hundreds of commentaries on the Bhagavad-gita by many erudite scholars, and almost every one of them was motivated by self-interest. Lord Sri Chaitanya Mahaprabhu is the selfsame Lord Sri Krishna. This time, however, He appeared as a great devotee of the Lord in order to preach to the people in general, as well as to religionists and philosophers, about the transcendental position of Sri Krishna, the primeval Lord and the cause of all causes.

The Essence Of Lord Chaitanya’s Preaching Can Be Summarized As Follows:

Lord Sri Krishna, who appeared at Vrajabhumi (Vrindavana) as the son of the King of Vraja (Nanda Maharaja), is the Supreme Personality of Godhead and is therefore worshipable by all.

The highest form of transcendental worship of the Lord was exhibited by the damsels of Vrajabhumi in the form of pure affection for the Lord, and Lord Sri Chaitanya Mahaprabhu recommends this process as the most excellent mode of worship He accepts the Srimad-Bhagavata Purana as the spotless literature for understanding the Lord, and He preaches that the ultimate goal of life for all human beings is to attain the stage of prema, or love of God.